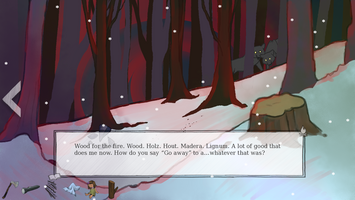 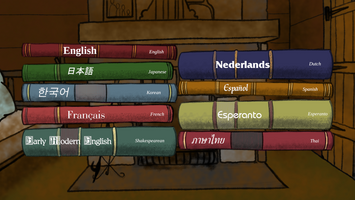 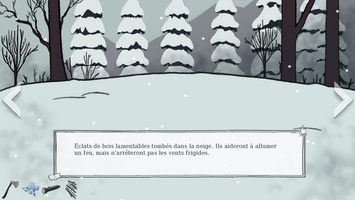 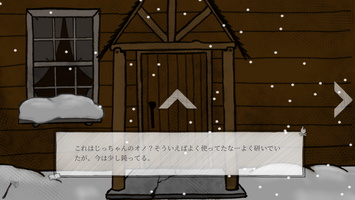 WARNING: Spoilers for Enkindle follow! Go play the game first; it'll take you just a few minutes and this will make a lot more sense.

We started this project at the beginning of October with a simple goal - make a game in multiple languages that is different depending on which language you play. Clarissa came up with this concept and I thought it was fun; having dealt with translation for WANTED: Dragon (Spanish) and Our Personal Space (French) and attempting to translate FFVII doujinshi, I was well aware of how ideas had to be portrayed differently in different languages, and how translation is both an art and a science.

We started with one story (which ended up as the Esperanto story) and made a few variations for different languages, but the problem was that they weren't different enough to make it worth reading through several different languages. And, we had a few other ideas of completely different stories we wanted to tell with various languages. Also, we kept trying to think of some way to hint to the reader that "hey, you should try reading this in another language, it's not the same!" without spoiling that key concept outright. We finally hit upon the idea of English as a frame story. Then we had to add an ending to give the player some resolution, though I'm still not sure how many people actually even play enough languages to get the idea that there is more to this game than just a single language's story.

It was a LOT easier to get these short stories translated (~500 words) than to translate a full-length game like Our Personal Space (100,000 words). But it still took more time than I originally thought, partly because some of our translators are not native speakers (I'm sure there's errors; please tell me and I'll correct them!). There's also this interesting thing that happens in writing where the shorter the writing, the more pressure there is to get it just right. It's like the difference between poetry and fiction - in a poem, every single syllable of every word matters a great deal. In a novel, you can replace "gigantic" with "huge" and it doesn't make much of a difference.

We also have the problem of a very niche audience - not many people speak/read more than one or two languages, and so much of the game is inaccessible to them. Translation technology, while no substitute for real human translation, can allow players to at least get the gist of what a language's story is saying. Since you can't really copy and paste from a video game, the easiest way I found to translate was to hold my phone up pointing at the screen and using Google Lens' Translate feature. I kind of hoped that a community might spring up of people curious what other stories were about and helping each other, but since the game is pretty obscure, I think I'm not going to wait around for that and feel OK with letting that little secret out. :-)

On the technical side of things, we had a pretty easy time since Ren'py has good support for translating games. The hardest thing was that the original language has to be finished before putting in translations, otherwise it's really difficult to keep them in sync. I also wrote some simple inventory/point-and-click adventure code that is reusable in case we (or anyone else) wants to make a point-and-click adventure games in Ren'py. (Our code is GPLv3 and available on Github).

When we were first developing, I had everything as text buttons so that I could work on testing the technical and story parts of the game while waiting for the graphics. While this meant I had to rewrite a few things, it was totally worth it because it let us work more efficiently in parallel.

I had heard about Ren'py's Web Application feature before, but it wasn't a good fit for my other games as they're quite long. However, it's perfect for this short game to allow people to play it without downloading and installing something. The one feature that didn't work with the web application was our snow VFX, which made it so none of the other graphics would load all the way, so I had to disable those for the web version.

I'm really happy with the music we found from Dark Fantasy Studio's The vanishing of Elizabeth Rose album. I bought their music with a game-making Humble Bundle a while ago and it was worth every penny. I appreciate that they release both looping and non-looping versions of most tracks.

I didn't work on this every day like the #devtober challenge suggests; my schedule doesn't really work that way. But I did make sure to work on it at least twice a week, and it definitely helped to have a concrete goal of finishing before Halloween!

A horror tale in multiple languages

So that's how you did it!  It's awesome!