We set out in 2014 to make a parenting simulator that also told a novel-length story about a doctor and a farmer trying to raise their family on a new colony in space. We wanted to provide opportunities to test out different ways of parenting and see possible consequences of those decisions, while also telling a compelling sequel to Our Personal Space. 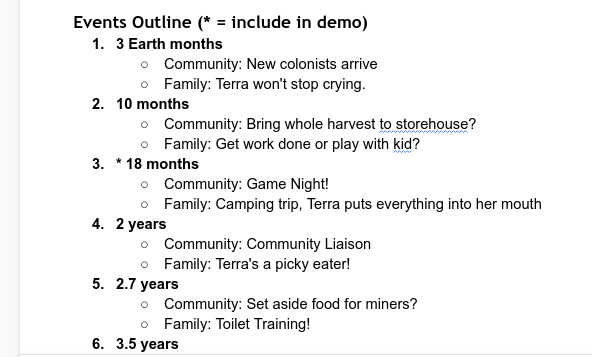 ANDREA: I feel like the plot and story of Space to Grow is satisfying, with each "year" (chapter) having an interesting problem or situation and the chapter ending with some kind of resolution. Some things wrap up a little too neatly to fit our episodic framework, but the game does remember your decisions so there is continuity.

Having this structure also helped when sitting down to write, because instead of a huge blank space to fill, there's just "Well, I need something interesting that could happen with an 11-year-old". It also allowed us to write out of sequence, so I wrote the beginning, a few middle events, and then the end, and then went back and tried to fill in the spaces with related events that would make sense and still be heading towards the same ending.

RACHEL: Andrea helped me to outline my community events. I knew that I wanted there to be a mining faction and a faction that leaves the colony. My basic outline was that there’s conflict in getting ready for the miners that escalates after they arrive, making the mavericks leave. After they leave, it’s harder to find compromises, but possible if you play sensitively.

Having lots of time to write

RACHEL: We didn’t give ourselves strict deadlines on writing, which helped when we had unpredictable things happen with our schedule. I had a difficult pregnancy, but enjoyed productive writing in my postpartum work hiatus. Then during the pandemic, my writing time evaporated when I started homeschooling my first-grader. Since we didn’t have a release date, it wasn’t too stressful to put the game on the back-burner for a bit. At the same time, I wonder if more deadlines could have helped me write faster.

RACHEL: I still feel like our game is one of the few that asks you to make real-life parenting decisions, like if you’re going to make your child eat what you made or “give in” to giving them applesauce.

ANDREA: One of the things that the game taught me, even while I was writing it, was that the only way to "fail" at parenting is to fail to do it at all. Throughout my research on psychology and parenting, the thing that came up time and time again was that parents needed to be there, and even if they made lots of mistakes and weren't that great at setting rules or being consistent or sympathizing all the time, just the fact that they were there was enough to help their kids grow. Because of that, the game is a lot easier than I had originally planned, with only one "bad" ending, because I honestly don't think that if you choose to be more authoritarian or more permissive you're going to permanently mess up your child.

Come up with color schemes early

CLARISSA: When I was doing the character art, color was one of my last priorities. I focused mainly on acceptable outfits for these settlers and how they might have changed and individualized themselves over time. As we started using some of the early sprites in the builds, it was clear that the color scheme was all over the place. I had come up with individual color schemes but I didn’t try to create a cohesive one for the whole game. It stood out pretty early on, so we sat down as a team and used some of our individual palettes to create a unified color scheme. This made it a lot easier later on as I was creating more of the townsfolk: I could say “This character’s theme should be yellow-based,” and already knew which yellow was going in there without a lot of additional guesswork. Creating the color scheme took a lot of time and research, but it was absolutely worth it.

Yes, You Can Make Money Selling Your Game (but maybe not a lot)

ANDREA: I feel like we did a good job of treating our business like a business BEFORE we published our game, so we have clear expectations, accurate bookkeeping, website, etc. I was worried no one would buy our game, but we made enough money to at least pay for business expenses, so I'm calling that a success. I also had never published on Steam before and underestimated how much time it would take to jump through all their hoops (next time, we'd start WAYYY in advance with having a game page to get people excited, etc), but we managed to get it done in a reasonable amount of time.

RACHEL: I pushed for us to sell this game for money rather than to make it free like our first game. Having even just 100 people pay for our game was really validating to me as an indie games writer.

ANDREA: I wanted the farming minigame to be a fun challenge, but every time I tried to make it harder, it just became annoying. I had an additional mechanic for pests increasing on crops if you planted the same crop in a spot multiple years in a row, but in addition to being buggy (ha ha), it cluttered up the UI and just wasn't that fun. I probably should have added more things to do with money so that it was more satisfying to successfully grow crops. I could have also added more special requests from people so that farming was more integrated with the relationship aspects of the game. 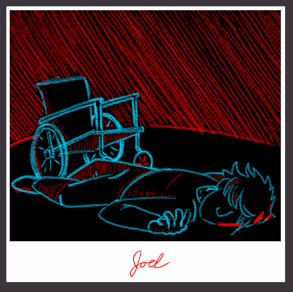 RACHEL: I was so excited to write a “realistic” murder mystery, where you don’t really know exactly what happened even if you find lots of clues. I think this might have been an anticlimactic end to the community event arc.

I had a “save the cave” event that pushed Pete over the edge. I replaced it later, because I wrote another cave event and I thought that two cave events would be too many. I replaced it with the event where the water is contaminated with heavy metals. One of our testers noticed that your decisions in this event don’t affect a lot of the story, and I felt kinda bad that the new event didn’t have as many cool choices as the old one. I knew that this event and a few others were weaker, but by the time I had finished writing the community events, I didn’t have the mental energy to revise them. I think I could have improved on this by either finishing the initial draft more quickly or by getting feedback before I had completely finished writing the events. If I get feedback on an event I’ve written two years after I’ve written it, it’s easy for me to stop caring about it. But a few weeks after I’ve written an event, I probably still care enough to want to go back and change things. Andrea and I did try to read each other’s events and give each other feedback, but if we made this a regular part of our development process, it could help our revisions be more consistent.

ANDREA: I wanted a lot of nuance to parenting decisions, but that was difficult to do when every situation had to end with the player choosing one out of four parenting styles. There is still some nuance, because your daughter's stats of attachment and competence can also increase independent of these decisions, but in the end we're just adding to or subtracting from variables. And most of the time, it was pretty easy to see what choice you "should" make - but I don't know how I could have made the choices more difficult while still keeping them distinct.

Art Style is Not Always Consistent

CLARISSA: When I was working on the art for this game, I just picked the art style I was currently messing around in. I knew there would be brief gaps between drawing various characters, but I didn’t anticipate some of the longer gaps between character designs and getting back up to speed took a lot of work and research. I kept a consistent color scheme (one set for the main characters, and a complimentary set for the other characters) which helped a lot, but I didn’t keep notes on line thicknesses, brush types, style rules, or fashion guidelines. By the time I was wrapping up the last few expressions and characters I had completely forgotten my initial research. As a result, some characters and expressions look totally out of place with the rest of the cast (hopefully it stands out less to other folks). If I was doing a game like this again, I would definitely want to knock out most of the character designs and keep the notes in/near the same file I was working in.

ANDREA: I don't like marketing. I feel like, "if I have time to try to get people excited about this game, I have time to work on the game and make it better, and that's more important!" However, no one is going to be able to find your game without some marketing, and maybe it's worth paying people to do that for you. Or maybe I need to value/enjoy it more!

I kind of already knew this, but I thought since we had over 50,000 downloads of Our Personal Space on Google Play we'd be able to get a lot of people to pay for the sequel there. However, that's not how people are used to doing things, especially visual novel readers. They're used to freemium or pay for a route or similar models of doing things. Also, those 50,000 players were from more than 5 years ago, and we didn't have a good way of letting them know "Hey, there's a sequel", and even if we did, would they still care about a game they liked that long ago? But I don't want to put in ads or anything so I'm not sure what to change here other than "don't take 5 years to make a game next time".

This was a huge project, with about 70% more text and graphics than the previous game, a farming system, a poetry system, and more nuanced decisions and dilemmas. Did that complexity make it more fun? In some ways it did, but in some ways it just made things messy and harder to keep track of. Novel game mechanics are fine, but in the end I think our audience mostly wanted a good story and relationship decisions, and if I make a game in the future I will probably stick mostly to those things and focus on polishing them more instead of trying to add lots of other new things.

However, we actually finished making our game, and the people that played it seemed to enjoy it! I know I learned some things about parenting and about myself while making this game, and hopefully players did, too.

Get Space to Grow

What kind of a dad and farmer will you be?

I enjoyed the game and would have happily paid more if it were asked. I have played hundreds of visual novels and would rather pay top dollar for a good one than a free open that was poor. I would agree that I am in the minority though.

Thank you so much for supporting our games (and many others, it sounds like!) and writing such a positive, detailed review. :-) I think it's hard to get noticed and for people to want to take a chance on something.